After his graduation with a degree in architecture from New York Institute of Technology in 1978, Roger Smith accepted a full-time position at BBS, where he had worked part-time as a college student, and stayed for a year. He left to take a position in the design and building industry, where he gained more knowledge of not only architecture but also of the construction industry and, in particular, construction management. “I learned an enormous amount in this short, impressionable moment,” he says. It was during this time that Roger discovered the art of the well-drawn construction document, the very key to how smoothly construction progresses. The better the construction documents, the better overall contract services are integrated, leading to a more seamless and trouble-free construction phase.

Roger returned to BBS in 1984, when he was asked back to run the architectural group. At the time, the firm offered some architectural services, but it was primarily known as a surveying and engineering firm specializing in land planning. “I came in and completely redeveloped the direction of the firm and transformed architectural services into the integral component of the business,” he says. By 1985, he was a partner. 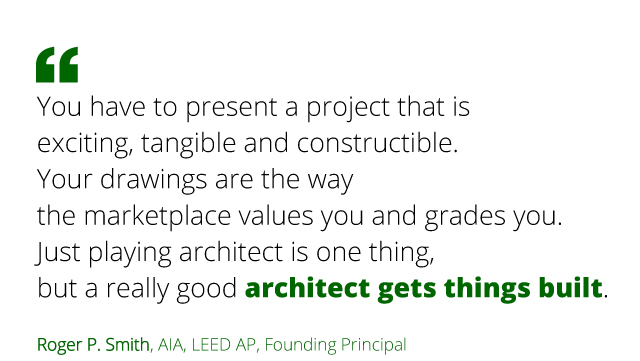 Soon after the firm, rather than outsourcing, brought in-house services such as mechanical, electrical, and plumbing engineering (MEP). A full-fledged landscape architectural and site design group was added in 2012. This gradual broadening of the firm’s in-house services – while strictly maintaining the highest quality of construction documents on all projects – has been a core ingredient in BBS’ success today.

Roger’s demand for well-drawn construction documents is also noted by construction experts. Just ask Joe Petrocelli, whose family owns J. Petrocelli Contracting in Ronkonkoma, which specializes in office and commercial construction. He worked with Roger and the BBS team on numerous high-profile projects such as the Atlantis Marine World destination resort in downtown Riverhead, which included a 75,000-SF hotel structure and a 23,000-SF events center.

“Roger is a builder’s architect,” Petrocelli says. “He can draw and design in a way that a contractor like me can work with easily. He has a good building sense and that helps us move a job quickly. Everything in construction is about time and money. Momentum is everything. He thinks about constructability and is conscious of how things go together.” With a BBS design, he says, a contractor can put up the shell of a building so that the trades – the masons, steelworkers, carpenters, plumbers and electricians – can go in one behind the other, without losing time on the project.

Kevin Harney, the principal of Stalco Construction in Islandia, is of the same opinion as Petrocelli. “We appreciate getting a set of documents and specs from BBS,” says Harney, whose company specializes in markets including retail, commercial, education, industrial, and mixed use. “Roger is the premiere architect. He’s built. He’s been one of us. If I have a question, he understands where I’m coming from. A lot of other architects have no building experience or have never spent time in the field.”

According to Roger, the key to designing a project that will stand the test of time is, “to present a project that is exciting, tangible, and constructible. Your drawings are the way the marketplace values you and grades you. Just playing architect is one thing, but a really good architect gets things built.”

This state of integrity and high quality of construction documents is something that is inherent to everything that Roger and BBS design today. It is also deeply embedded in the BBS professional staff’s mindset, specifically, when related to the firm’s educational work. A direct validation of this unhindered, long-term strive for high-quality construction documents, BBS was appointed by the New York State Education Department (NYSED) in January 2018 to perform third-party reviews of other firms’ school designs on behalf of the Department. BBS was selected as only one of several architectural and engineering firms across New York State and as the only firm based on Long Island.