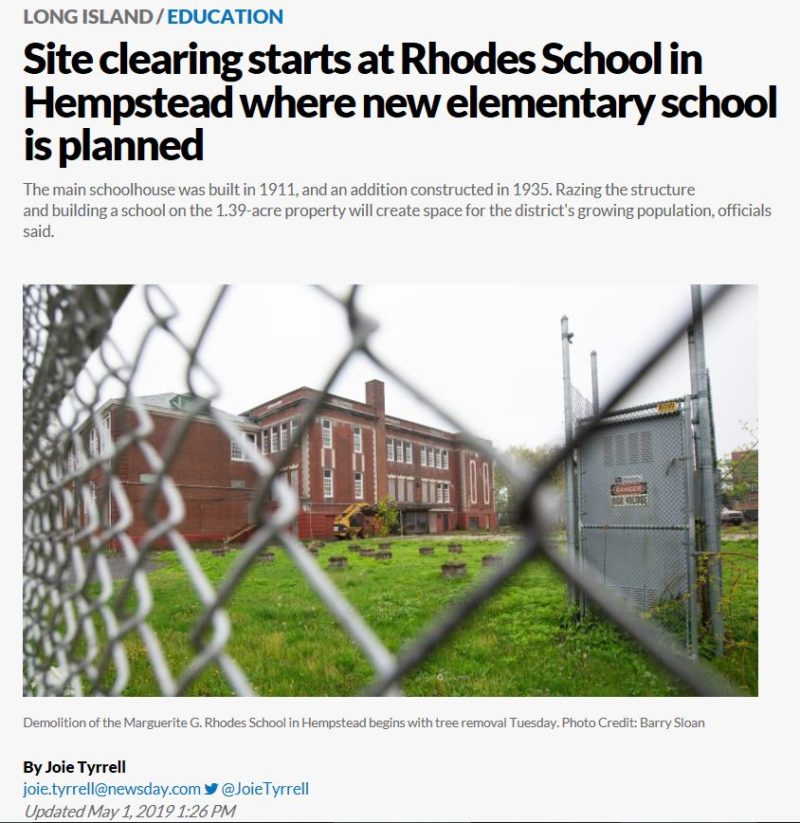 Hempstead, NY –  The main schoolhouse was built in 1911, and an addition constructed in 1935. Razing the structure and building a school on the 1.39-acre property will create space for the district’s growing population, officials said.

Tree removal was underway this week at the site of the Marguerite G. Rhodes School, marking the start of the demolition process for the condemned 108-year-old building to make way for a new elementary school in Hempstead, the district said.

Voters in May 2018 approved a bond issue of more than $46.8 million to raze the building and replace it with the school that officials said will ease overcrowding and eliminate the use of nearly half of the modular classrooms throughout the district.

Board President LaMont Johnson said Tuesday that the project represents “a major step forward and illustrative of the many positive things happening in our school district.” In a notice posted on the district’s website, Acting Superintendent Regina Armstrong said that the work had been expected to start Monday.

“All required testing and analysis have been performed within the building and the premises,” Armstrong noted. “All precautions will be taken to prevent and manage the removal of materials and/or contaminants from debris to protect the environment.”

The note also said that all pests and wildlife inside the facility had been removed.

In demolishing the Rhodes School — which was 93 years old when it was closed in 2004 — and building a new elementary school on the 1.39-acre property, the district will be able to provide space for the system’s increasing population. More than 9,000 students are expected by 2025.

Johnson noted that the board “is committed to ending overcrowding and upgrading aging facilities as this is key for the success of our students. By demolishing the aged Marguerite G. Rhodes School, we will now be able to construct a new school on that site and eliminate nearly half of the portable classrooms in the district.”

In 2017, a deliberately set fire caused minimal damage at the shuttered school building where records were stored, authorities said.