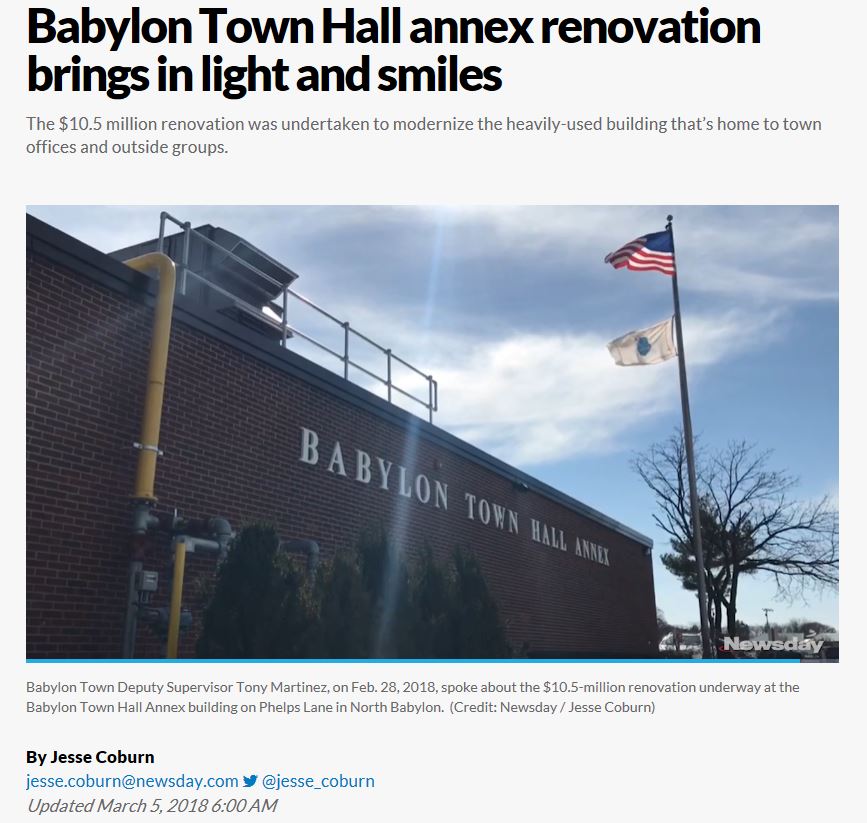 The Town of Babylon is about halfway through a roughly $10.5 million renovation of its Town Hall Annex meant to modernize the aging, heavily trafficked building.

Contractors finished work on the facility’s east wing in December, according to Deputy Supervisor Tony Martinez, who said town officials are now preparing to seek bids for construction on the west wing.

The need for the improvements at the building on Phelps Lane in North Babylon is great, Martinez said.

“We’ve been putting this place together with tape,” he said on a recent tour of the facility, where metal drawers are used to prop open windows and the town has put out buckets during storms to catch rain leaking through the roof.

Those conditions don’t exist in the renovated half of the building.

“That’s the way it should look,” Martinez said, of the fresh paint and polished floors of the finished wing. “Not like this,” he said of the other areas.

The bond-funded renovation began in 2015, Martinez said. Keeping the building up and running before then was a “nightmare,” said Vincent Piccoli, deputy commissioner of public works, who is overseeing the improvements.

Complicating the building’s issues was the volume of use it supports.

The 60,000-square-foot facility is open day and night, and hosts nearly a dozen town departments, from the Youth Bureau to Public Safety, as well as outside groups that rent space for meetings.

Babylon hired Patchogue-based BBS Architects and Engineers to draft design and engineering plans for the project, Martinez said. The plans included reconfiguring the building layout to tailor the old classrooms and school offices for government use, Martinez said.

Once the renovation is complete in 2019, the facility will have new walls, ceilings and floors, and a modern HVAC [heating, ventilation and air conditioning] system. Old building materials containing asbestos will be gone, and new wires, pipes and furniture are to be installed. The Annex will also contain a hallway “hall of fame” commemorating the athletic achievements of Babylon Town residents, Martinez said.

“It’s like walking into the matrix,” said Patrick Farrell, deputy commissioner of Public Safety, comparing the changes brought by the project to the futuristic science fiction movie.

Farrell’s office is in the renovated wing.

Martinez said he expects the improvements to be valuable to staffers and residents alike.

“You get better productivity from people in a better environment,” he said.

But “this doesn’t belong to us,” he said of the building. “This belongs to the residents.”