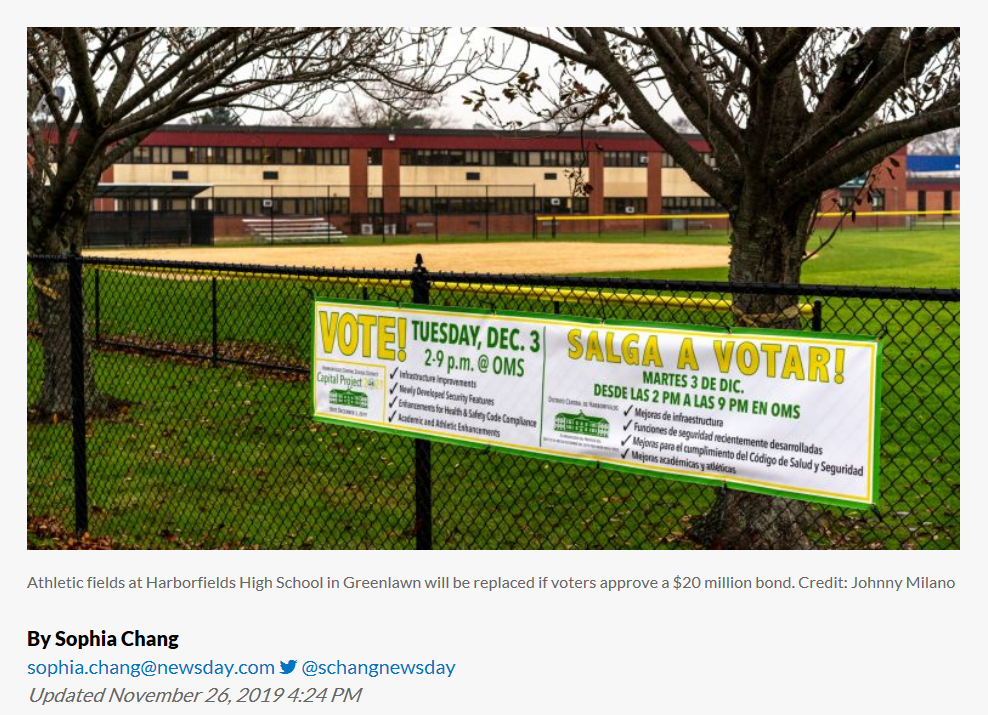 Greenlawn, NY – The Harborfields Central School District is poised to vote on a $20 million bond that includes replacing the high school’s grass field with synthetic turf.

If approved on Tuesday, the bond would lower residents’ school tax bills by an estimated $150 a year because of debt restructuring. A $52.7 million bond used to build Washington Drive Primary School in Centerport will be retiring in 2021 and 2023.

The district would use the bond funding to upgrade infrastructure such as replacing boilers, fixing cracked sidewalks and deteriorating ceiling and lighting fixtures, and improving fresh air intake, according to the district. The bond would also pay for building security vestibules at each school and replacing doors and hardware, as well as library improvements at some of the schools.

“I thank the community for its input and participation thus far,” said Superintendent Francesco Ianni in a message posted on the district’s website. “After holding numerous community forums on this topic, we are excited to move forward with a public vote on this proposal. It addresses critical infrastructure needs within the district and allows us to continue our mission of providing a world-class education for our students, one child at a time.”

One parent said this time the total package will benefit the district.

“Personally I feel that there’s something for everyone. Someone might not use the turf but there’s other things in the bond. Everybody’s going to benefit from it,” said Sue Meehan, co-vice president of the Thomas J. Lahey Elementary School PTA. “I do hope that it passes. I do think It will benefit everyone.”

The Harborfields Council of PTAs also supports the proposal.

(Update: The bond project was overwhelmingly approved by the Harborfields community on December 3, 2019.)